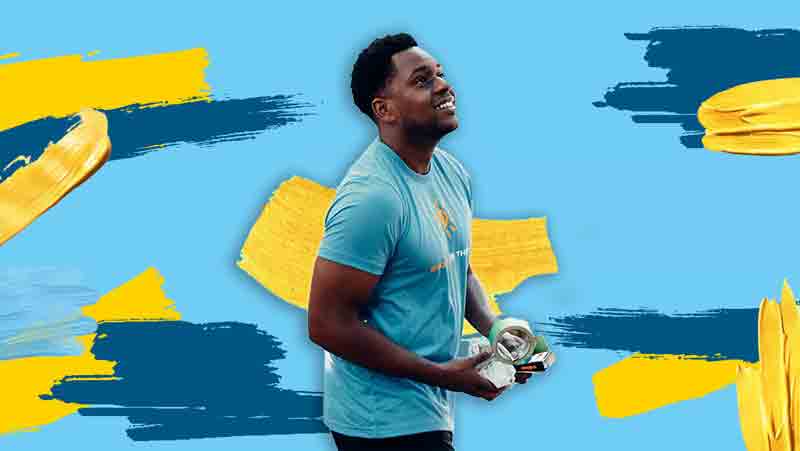 Being a Black-owned painting company in Toronto means so much to us at Brightest In The Room.

When the idea for Brightest in the Room came to our founder Akiel Rouse, he saw it as a way to serve his community.

At a very young age, Akiel knew that he wanted to follow in his father’s footsteps as a businessman and painter.

Taking his Black ethnicity into consideration, Akiel created Brightest In The Room in 2018 with the intent of applying his culture to the values of his company.

Being A Black-Owned Painting Company In Toronto

Akiel’s story is the epitome of hard work and generosity, which allowed him to open up a painting company in Toronto under the Black-owned identity.

Born and raised in Toronto, his childhood was shaped by the community and a household spirited by all walks of life. From a young age, Akiel learned to reflect and reason with his daily experiences and thoughts through art – The guidance he received from his father, Bryan Rouse ultimately set his journey in motion.

Akiel’s father fueled him by his faith, thoughtfulness, and determination during his early days as painter. Thus, the inspiration and values needed to delve into starting his first business propeled Akiel. Remarking every lesson learned, Akiel went on to service forgotten apartments for Canadian immigrants, providing a welcoming home for a fresh start in a new country.

Never would he have imagined that more than 10 years later, his passion would turn into the GTA’s best painting company (2021). Moreover, serving large commercial properties and impact diverse neighbourhoods across the GTA. And he also is grateful Brightest In The Room was recognized as an employer for Women-In-Trade and Black Canadians.

In recent years, Akiel has extended his focus to becoming the first Black-owned home-service franchise company in Canada. Being one of the first to identify as a Black-owned painting company, Rouse feels this goal can be reached. Overall, establishing a Black-owned painting company in Toronto has big hopes. The biggest hope is to instill show the possibilities of the industry for Black people in the Greater Toronto Area and beyond.

His efforts are now amplified as he has teamed up with, ReachCrowds, a marketing and public relations start-up in Toronto. In 2022, the partnership garnered “Brightest In The Room” attention from Canadian universities and colleges. Also, it received attention from community outreach network AnchorTO, and the TV network, HGTV.

Forget about the impact of the pandemic for a second. Toronto is one of the most diverse cities in the world and we want to represent that. Toronto is second to none with respect to diversity. Also, our company prides itself on being a reflection of that diversity. Being a Black-owned painting company in the Greater Toronto Area (GTA) means the world to us. We are here to serve everyone.

Accordingly, we will provide you with the best quality painting and painters, as well as the best customer service in the Greater Toronto Area.

We look forward to you choosing us as your leading paint service. Click here to get in touch with us.

We are excited to hear from you and exceed your expectations. There are many ways you can get in touch with us.

Call us Text Us Email Us